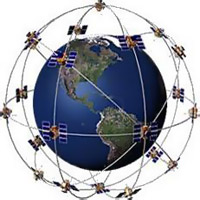 The Global Positioning System (GPS) is a satellite-based navigation system made up of a network of 24 satellites placed into orbit by the U.S. Department of Defense. GPS was originally intended for military applications, but in the 1980's, the government made the system available for civilian use. GPS works in any weather conditions, anywhere in the world, 24 hours a day, 365 days a year. The 24 satellites that make up the GPS space segment are orbiting the earth about 12,000 miles above us. These satellites are travelling at speeds of roughly 7,000 miles an hour. GPS satellites are powered by solar energy. They have backup batteries onboard to keep them running in the event of a solar eclipse, when there's no solar power. Small rocket boosters on each satellite keep them flying in the correct path. Each satellite weighs about 2,000 pounds and is built to last about ten years.

How Does GPS Work?

GPS satellites circle the earth twice a day in a very precise orbit and transmit signal information to earth. GPS receivers take this information and use triangulation to calculate the user's exact location. Essentially, the GPS receiver compares the time a signal was transmitted by a satellite with the time it was received. The time difference tells the GPS reciever how far away the satellite is. Now, with distance measurements from a few more satellites, the reciever can determine the user's position and display it on the user's electronic map. A GPS reciever must be locked on to the signal of at least three satellites to calculate a 2D position (latitude and longitude) and track movement. With four more satellites in view, the reciever can determine the user's 3D position (latitude, longitude and altitude). Once the user's position has been determined, the GPS unit can calculate other information, such as speed, bearing, track, trip distance, distance to destination, sunrise and sunset time and more.

Wide Area Augmentation System (WAAS) is a system of satellites and ground stations that provide GPS signal corrections, giving you even better position accuracy. How much better? Try an average of up to five times better. A WAAS-capable reciever can give you a position accuracy of better than three meters, 95 percent of the time. As long as your GPS system is WAAS enabled you do not need any additional equipment or pay any service fees. 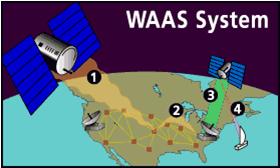 The Professional Plus is the world's most versatile water quality meter. Interchangeable cables and multiple accessories allow a single instrument to be quickly changed for use in the field as a handheld meter, for low flow sampling, or in the laboratory.