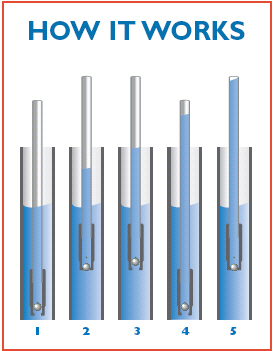 All Waterra foot valves can be used for conventional sampling, and are operated in the same manner. The pump consists of a foot valve attached to a length of tubing. To operate this pump:

The process of purging is the same as conventional sampling, just removing a lot more water. To assist with the pumping action we recommend a pumping mechanism for purging applications

Waterra inertial pumps are recognized as one of the best development tools for 2 inch monitoring wells and some 4 inch wells. Both the standard and high flow foot valves can be used depending upon well diameter and depth. The pump operates in the same manner as purging or surging. We recommend a surge block and pumping mechanism to increase efficiency.

Waterra's micro flow foot valves can sample wells with an opening as small as 0.5 inches. If a larger foot valve can be used it should, but sometimes the micro flow is the only foot valve that will fit. These pumping systems are usually hand operated but if assistance is required the electric hydrolift II can be used. 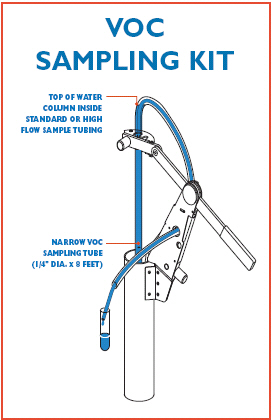 The low flow foot valve with it's 0.5 inch OD, and the even smaller micro flow foot valve with a 0.375 inch OD can push past obstructions where no other pumping system can fit. The largest foot valve that will fit should be used. The smaller foot valves are usually hand operated but can be driven by an electric pumping mechanism.

Both standard and high flow foot valves can be used for VOC sampling. In addition to the foot valve and tubing, about seven feet of 0.25 inch diameter VOC tubing is required.

After the well has been purged, the seven feet of additional tubing is inserted inside the pumps main tubing leaving about one foot protruding out the end. The pump is then operated until water is flowing from both tubes. When pumping is ceased, due to a siphon action, water will continue to flow from the smaller diameter tubing until it draws down to the level of water in the pumps tubing. This flow can easily be used to collect small undisturbed VOC samples.

The Professional Plus is the world's most versatile water quality meter. Interchangeable cables and multiple accessories allow a single instrument to be quickly changed for use in the field as a handheld meter, for low flow sampling, or in the laboratory.